Pre-ordered Nautical Campaigns? Send a mail to derrick@greatgamemaster.com if you have not received your links. Dismiss

A Complete Guide to Nautical Campaigns 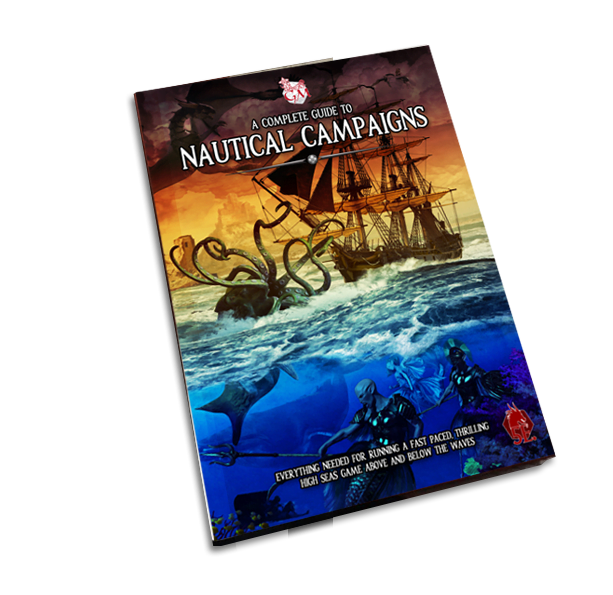 A Complete Guide to Nautical Campaigns is as complete a set of new rules designed to run fast paced, fun, and action packed naval games in a 5th Edition RPG. It started as a small add-on for my home game featuring sailing ships. As we used it, we realized there was so much more to the nautical world that the 5th Edition rule books didn’t include. We changed ship versus ship rules to be faster and more engaging. Then we added aquatic ships. Then port rules. Then customized ship building. Then magic items. Then ship upgrades. We even added rules for managing large crews and mass crew combat.

And it’s all done. The book is just over 170 pages without illustrations. It was written, tested, and rewritten by an amazing team of play testers and editors. It is ready to launch. 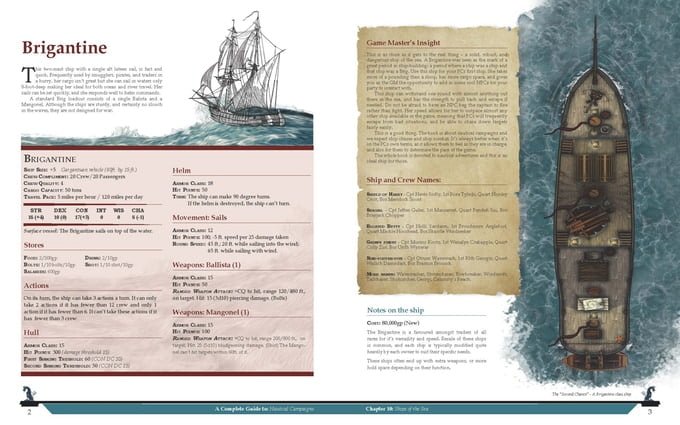 Expanded Roles Aboard a Ship – We have added in so many new and fun things for PCs to do whilst in command of a ship. No more sitting and waiting for ship combat to happen. Down time is now full of things for a crew and the PCs to do.

Crew – A massive overhaul of the existing 5th Edition approach, we have dynamic crew systems, rules for improving them, recruiting them, undead crew, and so much more. We wanted the crew to feel like they were more than just background NPCs but to not get in the way of a good story.

Crew – A massive overhaul of the existing 5th Edition approach, we have dynamic crew systems, rules for improving them, recruiting them, undead crew, and so much more. We wanted the crew to feel like they were more than just background NPCs but to not get in the way of a good story.

Ships Stores – supplies, food, water, medicine, repairs – our easy to track system makes sure the ship feels alive and like a living space, and gives the DM a massive opportunity for adventures by using the stores the put the squeeze on the PCs.

Ship Combat – A complete overhaul of the existing system. Our biggest focus was maximizing the fun, reducing the redundant rolling, and including every single PC aboard in combat fun. Our approach was to make it fast and exciting.

Ship Actions – We have over 78 ships actions – called Orders in the book – designed to allow any PC the opportunity to make a difference in ship engagements. Attack actions, evasive actions, buffing actions, and magic actions. No wizard in the party, no problem! We have actions for down time too – so that even when sailing for weeks across the bright blue, there is something to do.

Fleets – We have fleet rules, Admiral roles and actions, and even include blockading a port. This is mass combat on a massive scale. No more hand-waving and vague approaches. Having and Admiral comes with costs, but also improves your fleets chance of taking a port, sinking a titanic monster and more.

33 Unique Ships (we stretch goaled up) – We have so many ships – Human, Elvish, Orcish. Goblin. Merfolk, Lizardfolk, Dwarvish, Gnomish… the list goes on. Each with it’s own deck plan, mini-adventure, and more. We even have three different ports for your PCs to blockade if they are brave enough.

Building your own ship – Customized rules for building your own sweet ride, but be warned, it’s not cheap! This is for the true enthusiast, although not so technical that you’ll need to divide your beam by your breach… or whatever it’s called. Remember – we wanted it fast and fun.

Ship Upgrades – Our ships scale with your PCs. High level PCs should have ships that match their power. We quickly found that a level 15 mage has no need for a ship… until now. With the magic items we’ve added, and the upgrade options included in the book, a ship just suddenly got a whole lot more terrifying.

Sea Monsters – And with greater ships, come bigger monsters. We have rules on how to make titanic monsters. Truly massive beasts that require a ship or two to bring down. Rules from upgrading existing monsters, or making your own mean that you will have more than just a kraken up your sleeve.

Great GM Sidebar – And each section features dozens of little side commentaries from Guy Sclanders, author of the book, and host of How to be a Great GM on YouTube. The sidebars include insights, thoughts, and ways in which the section can be used and added to your game.

Costs – How much does it cost to sail from here to there? We’ve got tables and tables of costs, one ton of cargo – not a problem. We have done the work to give you easy to reference charts so that when PCs ask these kinds of questions you can simply answer them.

Ships, and what is new about them in A complete guide to Nautical Campaigns. 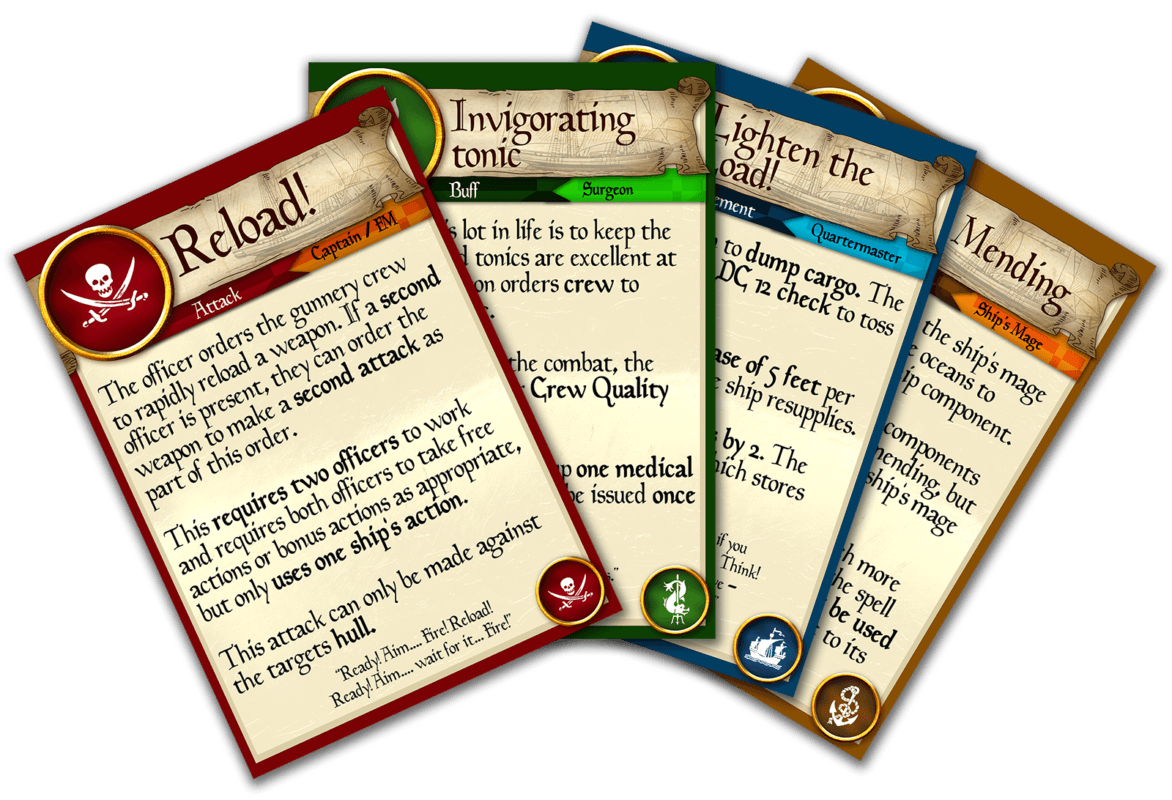 As part of the pre-order you will get the following with the book for Free:

The pre-order special is no longer available.

Will this book work with non-5th edition systems?

The new mechanics introduced for ship warfare, for crew quality, and fleet actions is a completely unique system not seen before in 5th edition. As a result it could work in other systems easily. Pathfinder 1, earlier versions of DnD and so on. The ships orders are not based (for the most part) on 5th edition skills, but on a contested roll or on a d20+crew quality value versus a difficult number, these could be adapted to other systems easily as a percentage value for example.

However, in the main, it was written using the OGL 5th Edition rules.

Will there be PDF Ship Sheets?

Yes! We are working with World Anvil to make the ship sheets digitally interactive. We will also release all the templates, ship sheets, and other bits and pieces that the book has as printable PDFs. Part of this KS is to raise funds to have nice templates designed.

If you look at The Complete Guide to Epic Campaigns – my last book – we released all the templates on World Anvil, and as PDFs on our website – www.greatgamemaster.com.

For the hard cover version that allow you to submit your own name or the name of a Ship captain the choice is yours. The book will have a section at the back listing all the backers who want their name listed, and if you choose to submit a name for a captain, that will be included into the book as an Appendix for people to randomly draw from. Please add your name in the notes in the order.

We just want to mention our thanks to everyone who helped make this book happen, from the special presale orders to the kickstater backers, you are amazing, and we glad we can bring you this guide!

Details for the kickstater